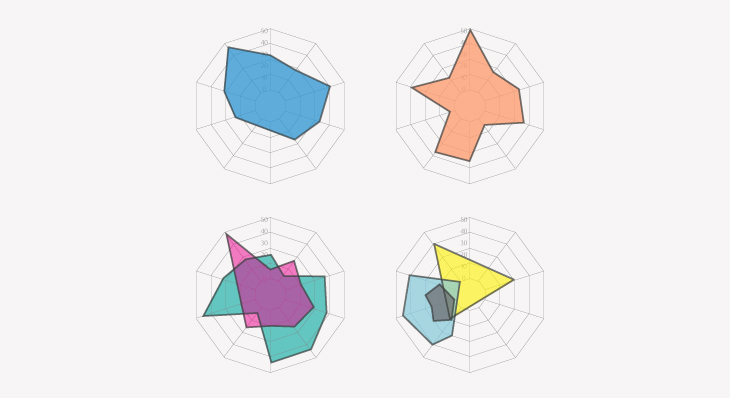 Put Radar Charts on your Radar

In this installment of Innovation Never Rests, we’re taking a comprehensive look into one of our newest data visualizations, the Radar Chart.

The Radar Chart may also be referred to as a Web Chart, Polar Chart, Spider Chart, or Star Plot.

These charts are often used to visualize continuous, circular data (such as periods of time or data that indicates a direction), and/or to uncover matching patterns across multiple values, to analyze your data from a different perspective. They’re incredibly useful for identifying variables that score high or low within a dataset as well, making them ideal for displaying performance, such as individual statistics. Take for example these Radar Charts displaying statistical production of professional soccer (football) players.

Using the Radar Chart, it’s readily apparent which athletes excel at particular facets of the game, making it easier for us to make comparisons and recognize patterns. While in this example the Radar Charts are displayed side-by-side (in a manner more akin to Small Multiples), they’re more commonly placed on top of one another, to assist in immediately identifying dissimilarities.

The most common alternatives to the Radar Chart are often Line or Bar Charts. And while these are great options, when analyzing cyclical data, it’s important we display our data using a visualization that’s more reflective of that nature. Take for example the following data visualization:

What we’re looking at, is a Line Chart in Dundas BI that’s displaying energy consumption data from January 2018 to December 2018. And again, like I mentioned, this is the most common way of viewing this type of data. But what if we were to re-visualize this to a Radar Chart? Would we be told a different story?

Figure 4: Selecting a Chart Type from the Toolbar

Now we’re viewing our data as it was meant to be viewed – in a cyclical fashion. It’s easy for us to see what chunk of area each segment is taking, and we’re now able to draw some more concrete conclusions. For example, it’s clear that during the winter seasons, we’re consuming the most energy, whereas during Spring and Fall, our energy consumption is near negligible (a small spike during the Summer months is also visible). Since the Radar Chart presents data cyclically, we’re able to see this pattern forming over the winter months, which wasn’t possible with the Line Chart, as the data originally presented itself at opposite ends of the chart. Since December and January are now connected, we’re able to make this connection.

If you look closely above at Figure 4, you’ll notice there’s actually two (2) other types of Radar Charts we could have chosen to use – the Radar Line and the Radar Point (we chose the Radar Area in Figure 5). I’ll re-visualize our data again, but this time I’ll select the Radar Line Chart. What this will allow us to do, is compare our data to a previous period (remember earlier when I mentioned Radar Charts are most effective when laid on top of one another? Here’s where that comes into play).

Now that we’ve added a second Radar Chart (comparing our data to the previous year), we can use this data visualization for pattern matching, to compare if my pattern this year looks similar or different from last year. In this specific example, we can see that while my energy consumption is down from 2017, I’ve maintained pretty much the same pattern. What this tells us, is that while I’ve managed to apply savings to my energy consumption each month, my usage pattern is indicative of past habits (i.e., greater energy consumption in the winter months, etc.).

Radar Charts in the Forecast

In some cases, you may want to take the Radar Chart and completely elevate it; you may want to customize it and push it to its limits to create something astounding and utterly unique. Why? Maybe because you’ve been asked to, or maybe because you simply want to push the boundaries of what’s possible with data visualizations. We’ve been inspired by some great examples of Radar Charts on the Internet and took it upon ourselves to create something even more striking and fantastic. With immense flexibility and limitless customization at its core, Dundas BI gives us the ability to visualize data the way we see fit; and we took advantage of that to create this Radar Chart (and surrounding dashboard):

What we’ve done, is created a snow and collision analysis for Toronto (using real data), using a Radar Chart. Our primary objective was to see if there were any correlations between the number of collisions and the time of year (which would impact the weather and volume of snow on the ground). Our secondary objective was to customize this chart to the highest degree to see what was possible (we think we did alright!).

You can download the data we used for this Radar Chart, here:

See if you can come up with a different design and different conclusions – share your creations with us at This email address is being protected from spambots. You need JavaScript enabled to view it. – you can download a full-version of our software for free, for 25 days, here.

Hopefully these examples have given you a glimpse into what Radar Charts can accomplish, and how they can best be utilized. They allow us to quickly understand how behaviors change over time and present us with a great method of monitoring patterns, comparisons and performance, and are especially useful when dealing with lots of categories.

New to Dundas BI? Schedule a demo or get your hands on it with a 45-day free trial or full product download.