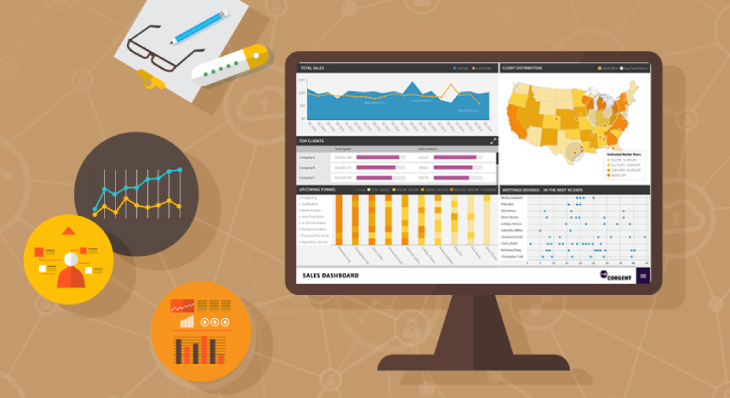 The basic purpose of a traditional dashboard is to make it easy for company management and staff to access crucial and current business data at little more than a glance. And, make no mistake about it, "easy" is the key word here - if the user has to work too hard to understand key information contained in a dashboard, then it has failed in its mission.

The fact is well-designed dashboards get heavily used - and badly-designed ones don't. If the dashboard layout doesn't deliver data clearly and concisely, then there's no point in making the effort to create it in the first place. With that in mind, let's review the "Seven Deadly Sins of Dashboard Design" - and why they should be avoided.

As noted, the reason for creating a dashboard is to gather together relevant data in one place for instant analysis. When a dashboard design forces us to either scroll down or navigate to another screen entirely, that "instant" factor is lost - we lose track of what we're looking at and our short-term memory is challenged. Not only that, but the data contained on a second screen or in an area that requires scrolling is perceived as being less important - and easy to dismiss. And if it actually is easy to dismiss, it probably shouldn't be part of the dashboard in the first place!

An effective dashboard puts the data into a relevant context - so we understand what the numbers mean and what response might be called for. Just supplying random figures - such as 30,000 orders have been placed - without comparing it to company targets, or showing whether the category in question is improving or growing worse, means we might as well be punching buttons on a calculator at random to see what happens. The proper context allows for the proper interpretation of the information - and motivates the correct action.

Have you ever been served a pie slice that's only about a millimeter thick? Probably not. Yet, many dashboards insist on serving up pie charts with so many razor-thin slices that you can barely make out what they're supposed to signify. Conversely, simple bar graph info might be better represented through a pie chart (for some very specific cases). Using the wrong type of chart to represent data can prevent proper analysis. The right chart gives you at-a-glance clarity that visually communicates efficiently and effectively.

Similarly, visualizing quantitative data in the wrong way can cause severe misinterpretation. For example, a 3-D Bar Chart can cause bars at the back to appear smaller than they really are. Also, when you use a bar graph and don't start from zero, proportions can become extremely distorted. Don't judge the visualization by the formula used to create that visualization - judge it visually just as the user will, to make sure it makes proportional sense.

4. Not Making the Right Arrangements

If the dashboard data isn't arranged in the right way, it won't have the visual impact you're looking for. This becomes even more important when the dashboard is interactive and one visual can affect another or when you have filter controls that can affect all or some of the visualizations on the dashboard. Always group together related metrics/controls for easy analysis/comparison, instead of placing them willy-nilly on the page. The design should be done in a logical fashion that facilitates the user's comprehension of all the data.

5. A Lack of Emphasis

Part of the job of a dashboard is to immediately draw your eyes to the most important information. If that data is draped in drab colors, you might check it last - or not at all. It's also a mistake to use bright prominent colors all across the dashboard - nothing stands out, even when it should. Again, you want to guide the user to read the dashboard the way it's meant to be read - that means properly highlighting the information that requires the most attention.

Dashboard designers can also get carried away - and add a lot of useless graphics that just detract from the data. Don't get us wrong, it's great to use graphic elements that enhance the information on display - but stay away from any kind of "Project Runaway" experimentation when it comes to business dashboards. That means junking the unnecessary pictures, logos, frames and borders and sticking to a consistent display design or integrated theme.

A large part of the dashboard's value comes from the fact that it provides "big picture" measurements of trends and movements, without a company employee having to dig through pages of reports to come up with the same results. Why, then, should a dashboard bother to offer too much detail in its presentation? For instance, money amounts don't need to be itemized down to the penny: it's easier to deal with $43.4 thousand than $43,392.98. Similarly, overcomplicating such simple items as the date (displaying April 23rd reads easier than 4/23/12) doesn't do anyone any favors. Again, the dashboard's prime attribute should be its simplicity, and that should be reflected in every aspect of the design.

7. Not Crunching the Numbers

A proper dashboard should clearly communicate the meaning of its data - rather than forcing the user to figure it out. That means utilizing the right metric to send the right message. For example, if you want company executives to monitor actual revenue versus the target revenue for the month, it's not enough to simply show the two numbers through two separate lines that are side-by-side on a chart. It's much better to graph the actual revenue as a percentage of the target number - or even graph the variance (+7%, -6% for example) around the 0 axis. Nobody keeps up with their algebra for a reason - so don't make the dashboard users do the math, make the dashboard do it for them.

By avoiding these Seven Deadly Sins, you can end up with a heavenly dashboard design - one that will communicate quickly and efficiently the data points you want communicated, so that those involved can do their jobs better. When form and function are both taken into account, the dashboard will achieve its prime objectives.